My Cart
Categories
Free Ground Shipping On All Orders!

"Won’t security cameras attract burglars to my home?" It’s a question we often get asked by potential customers. It’s a genuine concern, as a home with security cameras may stand out as a home that has important valuables to protect.

While this concern is valid, it doesn’t seem to have much support behind it. Security cameras don’t attract burglars to your property; but at the same time, they probably won’t keep burglars away from your property. More than likely, your security camera will go unnoticed by burglars.

Here’s the bottom line: security cameras, for the most part, aren’t designed to deter crime. They are there simply to record what happens so that, if there does happen to be a crime, you have video evidence.

The smaller the security camera, the harder it is for someone walking or driving by to notice. At Nelly’s Security, we sell all different sizes of security cameras. From giant PTZ cameras to tiny fixed lens bullets and mini domes. If your goal is to make your security system go as unnoticed as possible, you’ll be much better off purchasing a smaller fixed lens camera.

The good news is we have plenty of choices for you. All three of our main lines of security products—H-Series, R-Series, and Uniview—have excellent fixed lens cameras with very small form factors. Whether you’re interested in a bullet, a turret, or a vandal dome, you’re sure to find a compact camera that suits your covert security needs.

We also have a couple of mini vandal domes that you may be interested. You can read about our two mini domes and their differences here.

Installing Your Cameras in Inconspicuous Locations

A small form factor is a great start to ensuring your security system will go unnoticed, but it’s only a start. How you install your cameras will also influence how conspicuous your security cameras will be. Be sure to install them in places where passersby rarely look.

One of the easiest ways to do this is to simply install your security cameras under the eaves of your roof. This is a great place to install your cameras because you can easily run cable through the eave into your attic, garage, or wherever you need to run your cables. Plus, a small camera body tucked neatly under an eave can be difficult to spot at first, unless you know exactly what you’re looking for.

You could also hide your security camera inside or around other objects in your yard, such as a birdhouse. Wherever you install your camera, make sure you aren’t obstructing any of the view. Don’t forget to check your cameras at night; even if the image looks fine during the day, you might end up with IR glare at night if your camera is installed too close to an eave or another object.

If you really want to make sure your cameras don’t stand out, you can always try to camouflage your cameras. While most of our security cameras are white, we do offer some cameras in dark gray colors as well. Depending on the color of your home’s exterior, the gray cameras may be less noticeable than the white cameras.

However, even if your security camera is white, there are steps you can take to blend your camera into its environment. For instance, did you know you can paint your security cameras the same color as your roof or wall? True story! And it doesn’t even affect our Nelly’s warranty. We have a blog post and video all about how to paint your cameras, which you can check out here.

There are instances when a security camera may attract certain burglars to your home. But for the most part, security cameras won’t attract or repel burglars. They’ll simply record the crimes as they happen. So far, we’ve given you one strategy to ensure your security cameras don’t attract burglars: make them as inconspicuous as possible.

However, there the opposite strategy is more reliable when it comes to repelling would-be criminals. Instead of trying to make your cameras unnoticeable, try to make them even more noticeable with active deterrence features.

Active deterrence, as the name suggests, is a security strategy that aims to deter crime in active ways. Many times this involves some sort of audible and visual warning to potential criminals that they’re being recorded.

Again, we have a much more detailed blog post about active deterrence security cameras, which you can read about here. But for now, all you need to know is that active deterrence cameras typically use some sort of intelligent motion detection to search for human movement and then perform some kind of action in response to that movement. It could be a siren, a strobe light, a pre-recorded voice, or a combination of these elements.

How Does Active Deterrence Deter Crime?

Security cameras without active deterrence features are passive in nature. They simply wait for crimes to happen, and then record them as they do. A burglar may or may not notice a security camera. If they do, chances are they won’t care. Their face will usually be covered, so they’re not concerned about being caught on camera.

If a burglar knows they’re being recorded by a security camera, they may or may not continue their crime without a second thought. However, if the security camera is drawing attention to their crime and alerting the home owners as well as any neighbors within earshot, deterrence is much more likely.

The Uniview active deterrence PTZ is a great camera. It doesn’t have as many features as the H-Series camera, but it comes with plenty of sounds. It also has a brighter red and blue strobe light, as opposed to the white strobe of the H-Series models.

To see all active deterrence cameras, check out the product category here.

What Other Forms of Active Deterrence Are There?

If you have an alarm panel installed in your house with sensors on all the doors and windows, a burglar is much more likely to stay away from your home, knowing that both you and the police will immediately be notified of their unwarranted entrance into your home. Signs and stickers can be placed around your property to alert burglars of your home’s protection. These signs may not deter crime in and of themselves, since many people have these warning signs without having the actual systems installed. But if a burglar notices these signs and sees evidence of a security system installed in your home, they will most likely stay away. Even if they break into your home without realizing there’s a security system installed, they’ll most likely evacuate as soon as possible once they start hearing the unmistakable beep of your alarm system.

So, will a security camera system attract burglars? No, not necessarily. Will it deter them? It might! But at the same time, it might not. Standard security cameras don’t actively deter crime. And that’s okay, because that’s not really what they were designed to do.

If you’re nervous about your security cameras potentially attracting a burglar, you can take steps to hide your camera, either through strategic placement or through painting it the same color as its environment.

Active deterrence security cameras, on the other hand, do have a set of features that allow them to draw unwanted attention to potential burglars. These cameras will have a much better chance of scaring uninvited guests away from your property.

For deterring crime from taking place on your property, your best bet may be to use a video surveillance system in tandem with a security alarm system.

Now it’s your turn! Have you found any clever ways to hide your security cameras from plain view? Or do you prefer to make your cameras as obvious as possible, like our active deterrence cameras? Let us know what you think in the comments below! 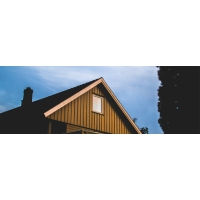