Method 2: Use a Keystone Jack

So with that said, let’s jump into it! There are two ways you can do this, depending on what tools you have at your disposal. If you're starting from scratch, we recommend starting with Method Two. All tools for either method can be purchased right from Nelly's Security.

Our first method is going to involve using an Ethernet coupler to create a makeshift pigtail for your camera. For this, we'll need a few tools.

For this project, you need four things:

You can pick up all of these tools (minus the damaged camera) on our website. Just click the links above if you need anything. Don’t worry about buying a full pack of couplers or connectors just for this one project. First, it may take you a couple of tries to get it right, so it’s always good to have extra connectors. But also, these are just good supplies to have on hand anyway. You never know when you’re going to need to terminate an Ethernet cable or fix a damaged security camera.

Now that you have your supplies, it’s time to get to work. Using your crimp tool or a pair of wire cutters, cut off the damaged connector. You can actually cut off the whole pigtail if you don’t need the other connections.

Now take your crimp tool and strip back your camera’s cable jacket. You’ll probably find some insulation in there, but you can just pull that back to reveal the colored wires inside. You can also cut off that insulation just to make sure it’s out of the way. 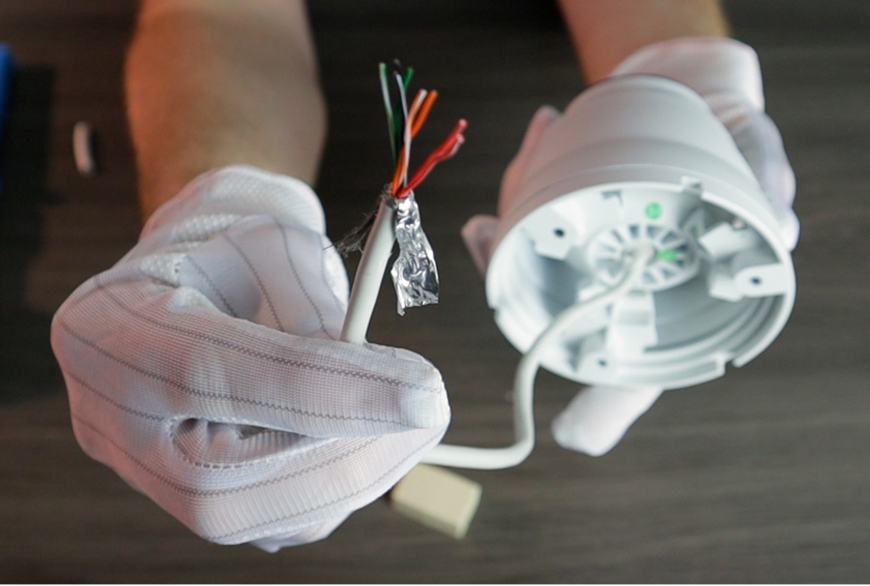 Next we’re going to terminate our camera’s cable, which just means we’re going to crimp our RJ45 connector onto the end of it. This is going to look a little different depending on your camera.

We'll start with R-Series cameras, which are a bit trickier than the rest, simply because it doesn’t have a full set of wires. When you cut open your cable and strip back the jacket, you’ll see a total of eight cables: orange, orange and white, green, and green and white. These are familiar. But then there’s red, red and white, black, and black and white.

Go ahead and cut off the solid red and the solid black; these are from the 12V DC connector, so if you're using Power over Ethernet, you don’t need them. If you're not using Power over Ethernet, go ahead and cut these wires off and get yourself a PoE switch. You'll thank me later. I suppose you could also wire these two cables to a 12V DC power supply, but why make things more difficult on yourself than necessary?

Once we cut those off, we’re left with six wires. Which means we’re going to have to be very careful about how we terminate this cable.

If you take a close look at your RJ45 pass-through connector, you’ll see eight tiny little rivets. These rivets are used to guide your wires into the eight pins. But since we don’t have eight wires, we’re going to have to skip some of these rivets.

So here’s the order we need: 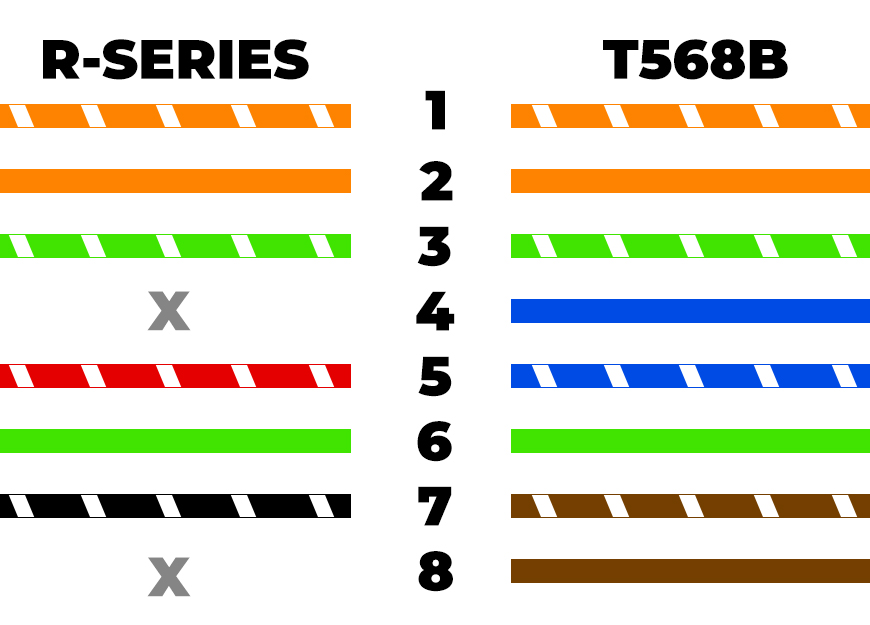 It may take a bit of practice getting those wires in just the right place, but trust me. If I can do it, you can do it.

Once everything is in the right order, slide the pass-through connector over the cable and crimp it into place. Congrats! You can now move onto step three.

If you have an H-Series camera, the process is going to be pretty straightforward. Once you strip your cable and pull back the insulation, you should see ten wires: the eight standard wires you find in an Ethernet cable (although these will be different colors) and the two wires from the 12V DC connection.

Again, take those two power wires (the red and the black) and cut them off.

Once those power wires are out of the way, you’re left with eight colored wires. If you’re used to terminating Ethernet connections, then this might look a little scary, because these aren’t the eight colors that you’re used to. That’s okay! We’ll help you line these up in the correct order.

Inside your H-Series connection, you will have wires with these colors: white, brown, blue, gray, purple, green, yellow, and orange.

Get these in the correct order: 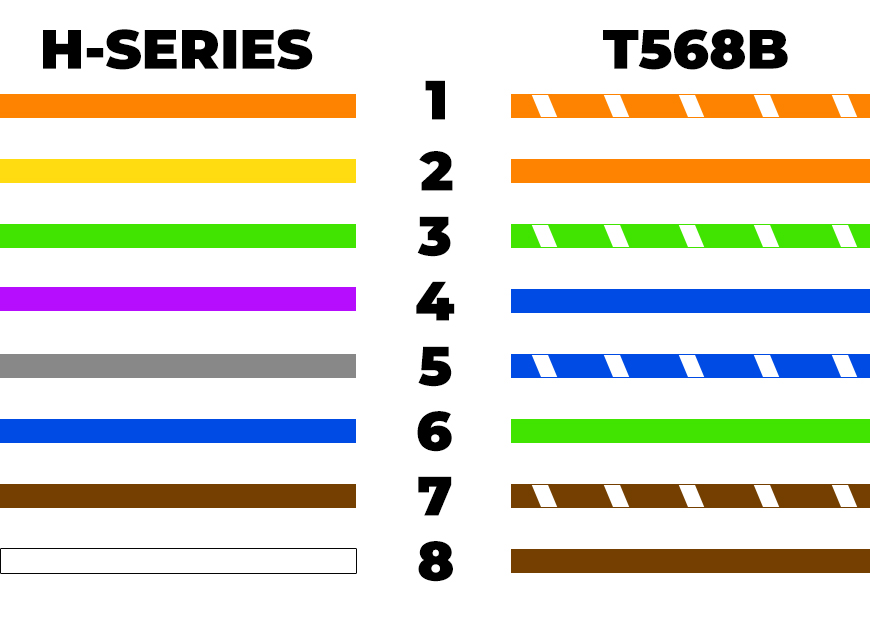 Slide the RJ45 connector over your cable and crimp it down. Congrats! You can now move onto step three.

Uniview is going to be the simplest out of the three cameras. That's because the pinout diagram for Uniview is identical to the T-568B Ethernet wiring. So to get your Uniview camera terminated, you're going to line the colors up exactly the same way you would line them up for a standard Ethernet cable: orange stripe, orange, green stripe, blue, blue stripe, green, brown stripe, and brown. 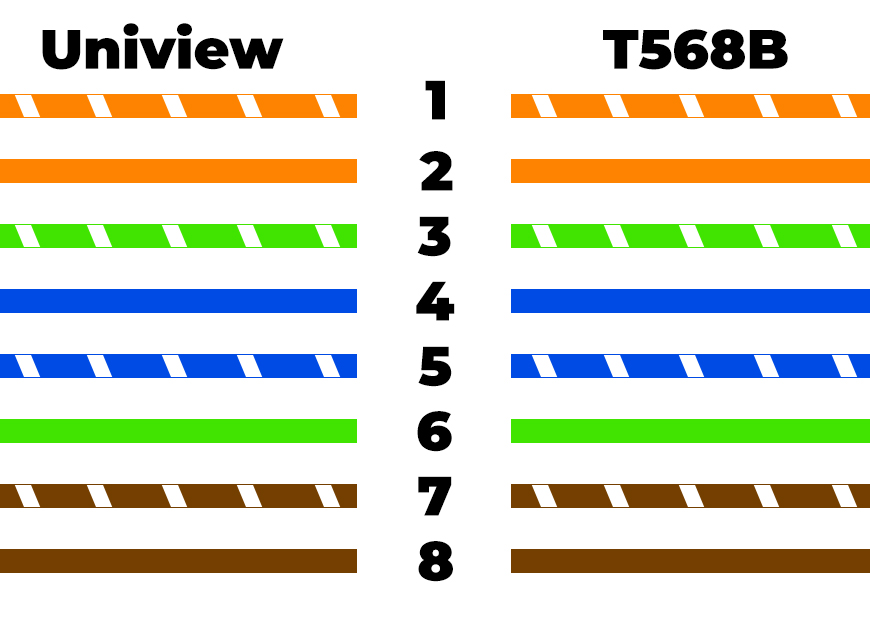 Depending on your camera, you may find different wires inside your cable. For instance, if your camera’s pigtail had audio connections, alarm connections, BNC connections, or anything else, you’ll obviously have more wires to deal with in your cable. But knowing how to handle the two types of pigtails above, you should be able to navigate your way through any other type of camera you come across. Just be careful to pay close attention to your camera’s pinout diagram.

This method is the easiest to do, as long as you have a keystone jack and punchdown tool handy. Here are the tools you need for this method:

Once again, you can pick up all of these tools on our website by clicking the links above. Again, these are always great tools to have laying around just in case you find yourseelf in a situation like this.

Just snip it right off with a pair of wire cutters. Again, you can go ahead and cut off the whole end of the pigtail if you don't need the other connections.

Step Two: Line Up Your Wires

Regardless of which kind of keystone jack you'll use, the important thing here is to get the cables lined up in the correct order based on the on the guide printed on your keystone jack. You'll most likely have a color code alongside a number, with two standards: T-568A and T-568B. It's important that you pay closer attention to the number than the color, especially if you have an H-Series or an R-Series camera. If you have a Uniview camera, you can follow the color code, as the Uniview's wire colors will line up. However you decide to line up your wires, be sure you're following the T-568B standard here. 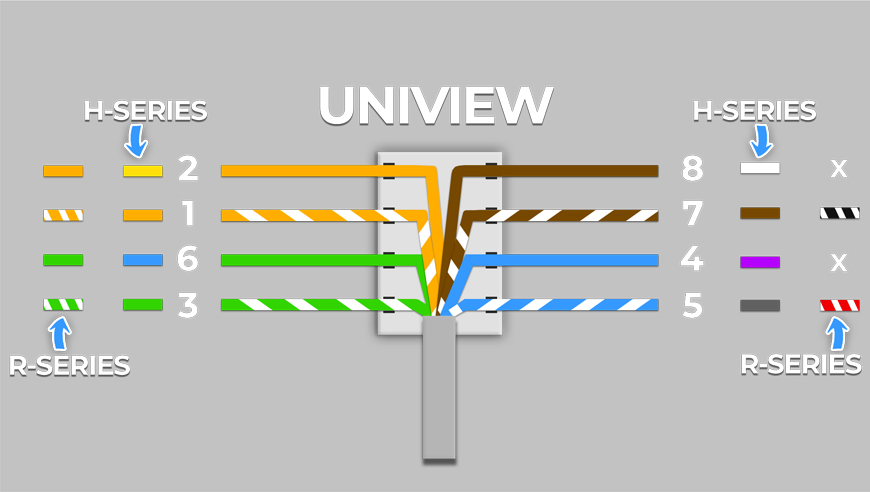 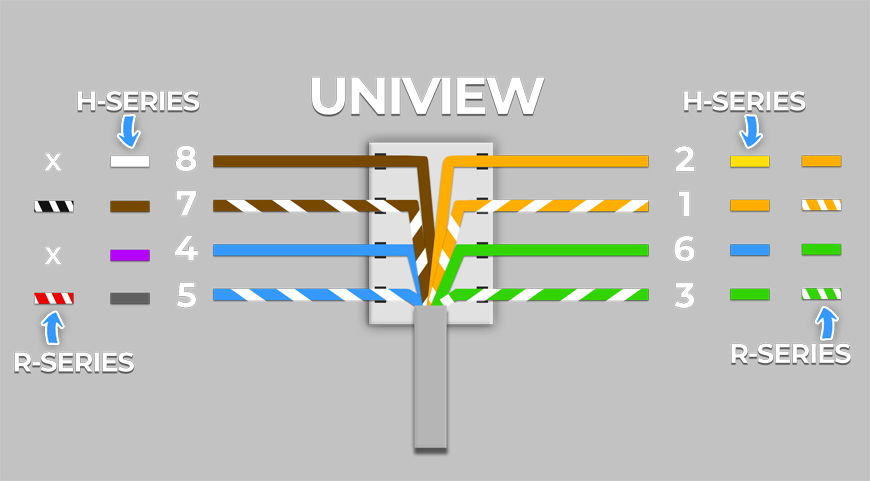 Step Three: Punch Down Your Wires

If your keystone jack requires a punch down tool, you can do each wire separately. Using the tool, simply push down on the wire to embed it into the jack's terminal. Makd sure the punchdown tool's blade is positioned on the outside of the jack, so that it can cut away any excess wire. You may have to punch down a couple of times to cut the wire properly.

If your keystone jack does not require a tool, you'll need to line up each wire at the same time. Then you'll snap your jack closed. Sometimes your jack will include a small lever ,which you can use clamp the jack even tighter to aid in cutting off any excess wire.

Regardless of which of the two methods you used to fix your connection, you are now done. You now have a makeshift RJ45 Ethernet connection made out of either an Ethernet coupler or an RJ45 jack. All you need to do now is connect your Ethernet coupler to the camera, and you now have a security camera with your very own make-shift pigtail. Connect that bad boy to your network and see if she fires up. 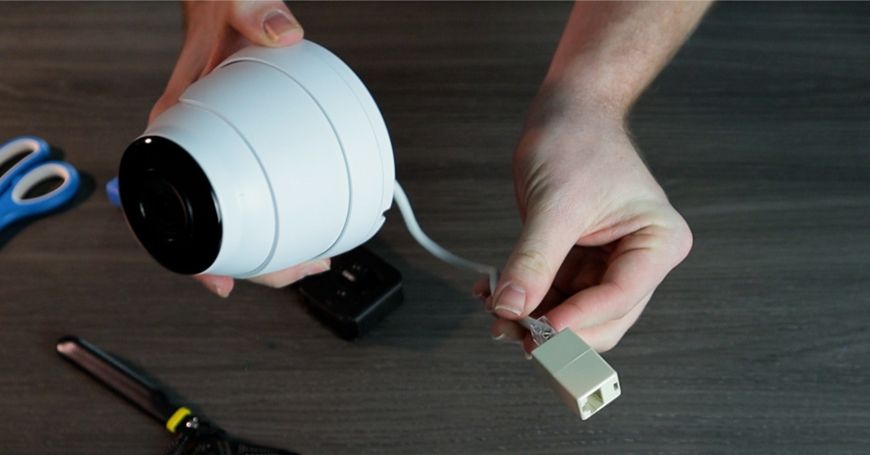 If your camera is working again, you may need to weatherproof that connection before you install it outside. To do that, just pick up some weatherproof tape and go to town. Make sure everything is fully covered. It’s not going to look pretty, but I never said this fix would be aesthetically pleasing.

Did this fix worked for you? Do you have any other tips for dealing with a damaged security camera? Share it with us in the comments below! It just might help out someone else. If you run into any issues during this process and have questions, don’t hesitate to give us a shout. We’re always here to help. 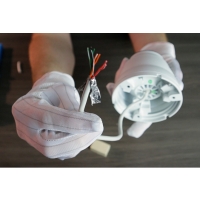 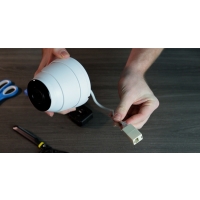 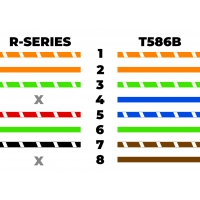 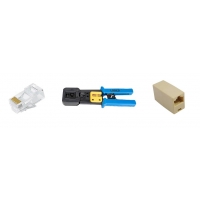 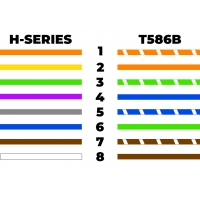 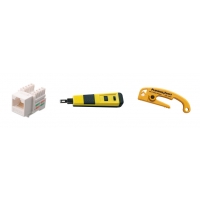 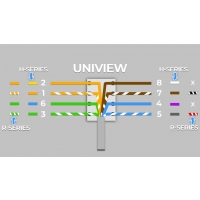 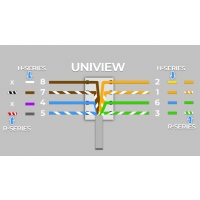 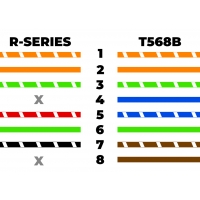 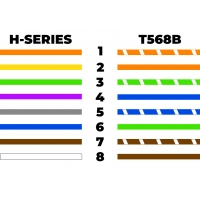 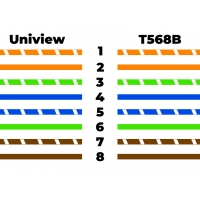