Installing a Surveillance System in a Restaurant: Things to Consider

If you own a restaurant or bar, one of the most proactive security measures you can take is to install a security camera system. Restaurants and bars often have a higher risk for crime and theft due to high rate of customer flow, extended open hours and high staff turnover rates. In a recent report, statistics revealed that nearly 75% of all restaurant theft is committed by employees, accounting for nearly $6 million in losses for U.S. restaurants per year.

A properly installed security camera system doesn’t just help prevent theft, it can also help protect your business from employees acting inappropriately, leaving early, or mishandling food as well as protecting you against lawsuits stemming from slips and falls or in the case that a fight breaks out.

One of the best things about a modern day surveillance system is you can view it from almost anywhere in the world on your PC, cell phone, or tablet. This means keeping an eye on your restaurant while at home, on vacation, or virtually anywhere else. When employees know they are being watched they are usually more productive and it inspires better performance overall.

Another benefit of having cameras is seeing exactly who comes in and leaves the restaurant as well as the time and date they entered and left. Transactions from registers can also be easily monitored and recorded. Another advantage is the ability to monitor deliveries of inventory.

What to consider before installing a security camera system in your restaurant or bar:

Before installing a security camera system in your restaurant or bar, you should consider all of the different locations within your restaurant or bar that you would like to view as well as the lighting of each location. This will help determine the type and quantity of cameras you will need for keeping a proper eye over your business.

Below we’ve listed several key locations and what to consider in each spot when installing a security camera.

Entryways and exits are the highest traffic areas of a restaurant. With people constantly coming and going there will always be a need to identify individuals when an incident occurs. With today's high definition IP cameras this is no longer something that is out of the scope of technology. A low profile, high megapixel, small form factor dome security camera would be ideal to capture people entering and exiting the restaurant.

Placing a security camera in your restaurant’s kitchen will allow you to monitor all kitchen operations to ensure all standards and health codes are being met from your staff. This will also allow you to view stock of inventory and order more product when needed as well as increasing profits from minimizing theft and related food costs.

Since kitchen areas will usually have higher temperatures, oil and steam from appliances and dishwashing areas it’s best to choose a weatherproof camera with at least an IP66 weather rating to protect it. A vandal resistant dome would also prevent the camera from being moved or tampered with. In many restaurants there is an exit located in the kitchen, be sure to cover it as well with a weather/vandalproof dome.

The main dining and bar area is one of the most important areas to install surveillance cameras. This is important because of constant traffic, money exchanges / tips, and possible "dine and dash" scenarios. This is where the customers will be spending the majority of their time therefore it’s best to have a camera that isn’t too obtrusive and doesn’t stand out too much from the decor. Low profile domes security cameras are almost always used in the dining / bar area.

There are also fisheye surveillance cameras that provide either a 180° or 360° view, these can be used to cover more area but often come at a higher price and sometimes do not support dewarping recordings.

Areas with cash registers are critical locations to install security cameras for capturing money exchanges. Many times a fixed lens camera won't have a narrow enough field of view to see the dollar amount of each bill. Varifocal security cameras not only provide a narrow field of view but many of them are motorized, meaning you can zoom in and out on the cash register and the surrounding area.

Having a motorized varifocal security camera is beneficial for capturing individual dollar amounts and who is making the transaction. Just like the other areas of the restaurant a dome would fit best and is usually placed right above the register or looking at the register from a slight angle.

The parking lot is also an essential area to have cameras. With cameras on the outside of the restaurant you will be able to capture people coming in, incidents in the parking lot, and any suspicious activity. These camera should have a full IP66 rating to protect against the elements of changing weather.

Other Things to Consider

Surveillance cameras will need to record to an NVR/DVR which should be located inside the restaurant in a secure location. The NVR/DVR will need a hard drive to store all the video footage from the cameras. Consider how much recording time is needed before the hard drive overwrites the oldest recordings. Many people choose two weeks to a month of recordings. Keep in mind that the more cameras you have the more hard drive space you’ll need.

Now that you have a good idea of what cameras to put where there are a few other things to consider when narrowing down your camera selection and locations. One main factor is keeping the cameras out of private areas such as bathrooms and breakrooms. Cameras should only be in public places to avoid any lawsuits and privacy issues.

If you choose to have cameras with audio you will want to make sure that your state allows audio recording with surveillance cameras. These laws vary state by state so it’s important to check laws for the state the cameras will be installed in.

Aesthetics are often considered when picking cameras for a restaurant. As mentioned above domes are excellent for restaurants because they are aren’t as obtrusive as bullets and many people consider them more visually appealing than bullet or box cameras. Domes also come in mini and low profile housings which are less likely to be seen by customers and tampered with.

After analyzing the locations and types of cameras you will need you may notice that a combination of domes and bullets are required for the surveillance system. We have pre built packages ranging in 4, 8, 16, and 32 cameras that include both domes and bullets. An excellent choice for many people is our motorized bullet and dome packages:

If you need something for general coverage without the motorized functions of the cameras we have H series packages that produce an outstanding high definition image at a fraction of the cost of the packages above.

We hope this article has given you a better understanding of the camera types, locations, and things to be aware of when considering a restaurant surveillance system. 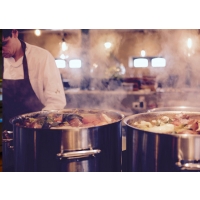